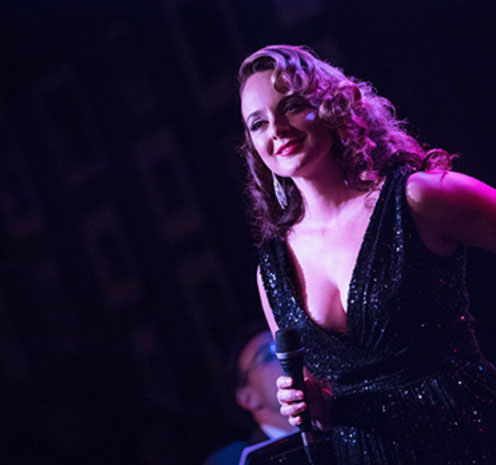 Melissa Errico is a Tony-nominated Broadway actress who has spent 30 years defying definition. While starring on Broadway and working off-Broadway and in television and film, and now as a writer, she has also steadily kept a keen eye on making ever-newer styles of music. Her new album Out Of The Dark, a cycle of “Noir” songs that reaches towards a new sense of what Noir can be, is only her latest adventure in redefining what a concert of great American (and sometimes French) songs can be and do.

Her first appearance on the intimate concert stage was when she became the youngest performer to ever work at the famed Cafe Carlyle, where she spent a month in an acclaimed cabaret act called New Standards, arranged and musically directed by Lee Musiker. Singing two shows a night—and discovering how much she loved the 11 pm shows and the nightlife, a taste still reflected in the imagery of Out Of The Dark -- she was soon signed to a record deal by her first musical mentor, Bruce Lundvall of Blue Note Records. Under his guidance, Melissa’s solo debut album was the eclectic and jazz-inflected Blue Like That, arranged and produced by Arif Mardin, featuring songs from Richard Rodgers to Rickie Lee Jones. It marked the beginning of what has remained her unique position in the Broadway community as a singer who explores jazz and songwriter material with the same attention she gives Stephen Sondheim or any other great storytelling musician.

Closely associated with the music of Michel Legrand, after starring in his only Broadway musical, “Amour,” Melissa went on to make a symphonic album Legrand Affair - The Songs of Michel Legrand with the 100-piece Brussels Philharmonic (and an American jazz trio featuring Steve Gadd on drums) arranged and conducted by Legrand and produced by Phil Ramone, with Legrand at the piano. Upon Legrand’s passing, she was asked to write his eulogy by The New York Times and invited to become the only American performer to participate in the extraordinary two-day memorial to Legrand held in April 2019 at Paris’s Le Grand Rex Theatre.  Her re-issued album of Legrand’s music, Legrand Affair Deluxe Edition (Ghostlight/ Warner Music Group), appeared in 2019 and led one critic to proclaim, “Errico is, and will continue to be, the premier interpreter of the musical legacy of Michel Legrand.”

Melissa has also made two studio albums produced by Rob Mathes, the first, Lullabies and Wildflowers (Velour/Universal 2008), was a set of songs about motherhood, while she and Mathes then collaborated a decade later on her path-breaking 2018 album Sondheim Sublime (Ghostlight/ Warner Music Group). Called “The best all-Sondheim album ever recorded” by The Wall Street Journal.  The album generated superlatives among the fiercest Sondheim aficionados, with one critic writing that, “with the warm, gentle purr of vibrato that invades her exquisite delivery ever-present Ms. Errico engages, grabs and holds no matter what Sondheim song falls from her lips.”

Melissa’s gifts and ambitions as a writer have also become increasingly evident, with a series of much-talked-of essays in the New York Times, touching, with wit, wisdom, and insider mischief, on the many unseen aspects of the theatrical profession-- from the pleasures and pains of being a ‘terminal ingenue’ to the ambiguities of auditioning to the sheer pleasure of being fitted for a costume, post-pandemic. She is currently working on a memoir that will include and expand on these “Scenes from An Acting Life,” as the Times, in a rubric specially invented for her work, calls them.

Her vocation as a writer has also led her, in recent years and throughout the pandemic, to writing and performing unique and poignant concert experiences-- ranging from tributes to Sondheim, or Legrand and the French love song, to shows about the history of Manhattan and the Broadway masters of Bucks County. With scripts often co-written with her frequent lyricist and collaborator, the New Yorker essayist Adam Gopnik, Broadway World calls these concerts “one-of-a-kind shows that balance whimsy with intellect, hilarity with empathy, music with conversation, and always in a style so unique, so personal, so original that they might as well make a blueprint!” Another critic has said that “Melissa is in a constant state of creation, looking to grow as an artist, and when she puts out shows like this, she effectively grows the art form of cabaret.”

Her Broadway starring roles include My Fair Lady as Eliza Doolittle, Cole Porter’s High Society, Dracula, White Christmas (playing the role made famous by one of her idols Rosemary Clooney), Anna Karenina, Les Miserables, and Michel Legrand’s Amour; and her many Sondheim roles include Dot in Sunday In The Park With George at The Kennedy Center, opposite Raul Esparza; Clara in the hit John Doyle production of Passion at Classic Stage Company; and Leona in Do I Hear A Waltz? at New York City Center. In addition, she has sung at The Ravinia Festival, Royal Festival Hall, and The Palladium in London, and with such orchestras as the NSO at The Kennedy Center and Wolf Trap, several times with Marvin Hamlisch conducting her; as well as with The Cleveland Orchestra, The San Diego Symphony, The New World Symphony with Michael Tilson Thomas, and at The Hollywood Bowl, Catalina Jazz in LA, Feinstein’s/54 Below, Birdland Jazz Club and Dizzy’s Club at Lincoln Center.